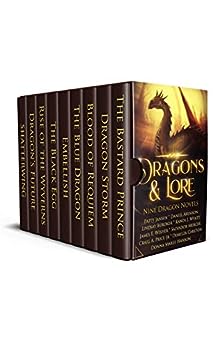 The Bastard Prince - Patty Jansen
She has a dragon and she's not afraid to use it.
Problem is, the dragon has other ideas...

The Black Egg - James E. Wisher
Whoever Controls the Dragons, Rules the World.

Dragon Storm - Lindsay Buroker
Born with a secret power he must hide...

Embellish - Demelza Carlton
A maiden dying for adventure. A hero on a perilous quest. Monsters that must be slain.

The Blue Dragon - Salvador Mercer
A thousand years ago, on the world of Claire-Agon, a war raged between men and dragons.

Dragon’s Future - Kandi J. Wyatt
Trapped in a boring life, Carryl longs for something different. With the death of a dragon rider, she realizes her dream of becoming a rider herself. But first she must save the despondent dragon's life.

Blood of Requiem - Daniel Arenson
Long ago stood the kingdom of Requiem, a land of men who could grow wings and scales, breathe fire, and take flight as dragons. Requiem ruled the sky.

Dragonia: Rise of the Wyverns - Craig A. Price Jr.
All hope seems lost to stop the Dragonia Empire from enslaving everyone... until the Resistance discovers an island full of wyverns.

Shatterwing - Donna Maree Hanson
The world of Margra is a desolate wasteland after one of its moons shattered. Factions fight over resources as pieces of the broken moon rain down, bringing chaos, destruction and death.

Leave the Book a Review! (Because you're awesome, and authors LOVE Reviews!